I normally put the disclaimer at the end, I should mention that since the previous article I have joined Epic’s Support-a-Creator program which provides me revenue for referrals (use the tag SYSTEMCHALK 😉 ) and the links will reflect this change moving forward. This is especially important since this is a pure opinion piece which was originally going to be a Twitter thread, but I want to put more effort into blogging. I’d like to think my opinions are worth more than a referral percentage, but as always, do your own price comparisons and allow this disclosure to factor into your reckoning however you want. Also Subnautica’s on sale.

There is a tried and true scene in Hollywood where the hero finds themself in prison, finds the biggest, meanest inmate he can and proceeds to provide a nuanced commentary on the seventh chapter of Machiavelli’s Il Principe with his fists to show that he’s not a man to be trifled with. Epic, for the crime of making Fortnite, has been incarcerated in the PC Digital Storefront Maximum Security Penitentiary and wants to show it means business.

If I had to guess, Epic is fighting against becoming an ‘also ran’ with a small part of the market and instead is attempting to position itself as a credible alternative to Steam with the market share that comes with it. The Epic Store launched with an impressive roster of exclusives like Hades, Ashen, and Hello Neighbour: Hide and Seek. Since then it has captured Tom Clancy’s The Division 2, and, most notably, Metro: Exodus weeks before release. These kinds of deals are almost certainly not cheap, but they communicate how serious Epic is about its storefront.

Kotaku recently ran a piece regarding Valve’s reaction and how it leverages toxic elements of its community to harass a defecting product. I am not inclined to share the villainous mastermind explanation since the weight of the evidence does not equal the weight of the charge. However, even divorced from malicious intent, Valve’s cries of “unfair” are a flabbergasting response to a new and unproven entrant.

The Epic Store’s claim to fame at present has been succeeding in spending a lot of money in getting temporary exclusives onto its relatively small store. A new game by Supergiant is no small thing, and the excitement surrounding the store is as much about its potential, but Valve could remain perfectly stoic about an upstart who is burning through a lot of money to get attention. Stores that spend more than they bring in don’t last very long, and with a 12% revenue share, Epic needs to sell even more copies to make this money back. Instead, and unlike any other competitor, Valve has elevated the Epic Store’s status by saying out loud that they are a threat, and offering level of credibility even Fortnight money can’t buy.

When IBM entered the PC market in 1981, Apple ran an ad saying “Welcome, IBM. Seriously.” Here’s a copy of it: 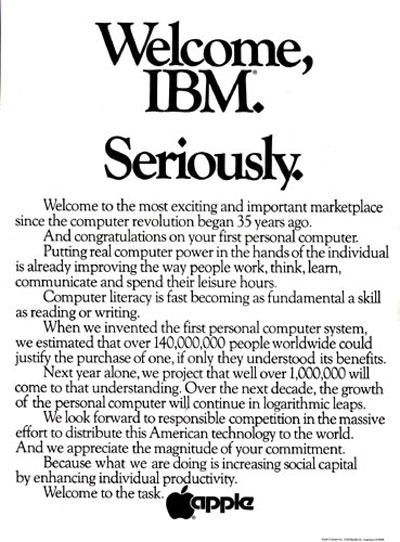 What the ad doesn’t show is that Apple’s market share wasn’t all that different from the other PC makers Commodore, Tandy, or Osborne, and so successfully created the impression of a duopoly that didn’t exist. There is no direct analogy to the PC Gaming market of today, but this anecdote shows how valuable the impression Valve just gave the Epic Store is.

Valve simply did not need to comment on the departure. There have been other platform exclusives. Thronebreaker: The Witcher Tales, went from being an exclusive on GOG to being sold on Steam even while Valve was launching its own card offering of Artifact. However much the “unfair” comment was intended to punish Exodus for defection, Valve has focused its attention in the wrong place. Valve has elevated a competitor that has needed to buy its attention to one that is serious enough to hurt them, and Epic is left swaggering in slow motion at a flattering low angle while the inmates and guards stare on in disbelief.

View all posts by systemchalk